One of the ports of call on a Baltic cruise is the Russian city of St Petersburg. Christmas in St Petersburg is something quite different, yet very special.

Christmas in St Petersburg is a little different from in the West, as it is celebrated on January 7th.  The reason for this is that the Russian Orthodox Church continues to use the old Julian calendar, which is thirteen days behind the more commonly used Gregorian calendar which most of us are familiar with. 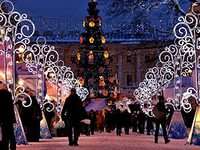 A visit to St Petersburg at Christmas (whenever you celebrate it) can be a magical and enchanting vacation experience. A snowy blanket over the city in December is almost guaranteed. There are ski resorts and Christmas theme parks just outside St Petersburg, which transport the visitor to a winter wonderland; they can even take reindeer rides and sleigh rides through pristine white forests.

The city of St Petersburg has much to offer as well, with Christmas markets and displays. The market at Ostrovskogo Square has close to seventy stalls which offer everything from traditional foods like blini, to hot drinks; traditional Russian crafts; a children’s theatre; and an ice skating rink. These markets are operational from mid-December, right up through New Year’s Eve and until January 7th.

December 25th is not a public holiday in Russia; Russian holidays over the “Christmas” season are as follows:

A visit to St Petersburg during the Christmas season can be a magical and unique experience. A brilliant stopover during a Baltic cruise, it is a city to put on one’s “bucket list”, for a vacation like no other.

As the official home of Santa Claus himself, Christmas is undoubtedly the best time to experience the magic of Lapland. The enchanting northern region of Finland is packed full of…

END_OF_DOCUMENT_TOKEN_TO_BE_REPLACED

A visit to St Petersburg, whether as part of a Baltic Cruise or a land vacation, will not be complete without picking up a gift or souvenir to take home…

END_OF_DOCUMENT_TOKEN_TO_BE_REPLACED

Amongst the most popular Lapland trips offered by Scandi Travel are those which travel from Helsinki in Finland’s south, to Rovaniemi, and the heart of Lapland. Visitors can experience both…

END_OF_DOCUMENT_TOKEN_TO_BE_REPLACED

With stunning arctic surroundings, a plethora of festive activities and the unbelievable northern lights in the mix, a Lapland tour is the perfect way to ignite your Christmas spirit. And…

END_OF_DOCUMENT_TOKEN_TO_BE_REPLACED

It may be summer in the Northern Hemisphere, but now is the time to look ahead and book winter holidays to Lapland for the coming Christmas season. Finnish Lapland is…

END_OF_DOCUMENT_TOKEN_TO_BE_REPLACED

Situated in heart of the Russian Imperial city of St Petersburg, Hotel Pushka Inn is but a very short stroll from top attractions including the Palace Square, Kazan Cathedral, St…

END_OF_DOCUMENT_TOKEN_TO_BE_REPLACED

We use cookies to ensure that we give you the best experience on our website. If you continue to use this site we will assume that you are happy with it.ConsentRead more